Skip to content
Vote for The Inquisition
PLAY NOW

The Lithmorran people are typically fair haired, with light skin and blue to green eyes.  They range in height from over 6 feet (usually males) to just under 5 feet.  While not on the heavy side, neither are Lithmorrans lightly built.

The central duchy of the nation and seat of the Royal Family, Lithmorrans proudly lay claim to the City of Lithmore, capital of the realm.  They exist in the middle of all trade, having the best access to goods from other duchies and regions, and thus have developed a distinct culture of their own.  However, their religion has bred intolerance and deep-seated xenophobia.  Lithmorrans make a concentrated effort to differentiate themselves from those of other duchies and believe their own ways to be superior as proven by the Lord of the Springs in their conquests during the Consolidation.  Time has only further increased the close-minded attitudes of Lithmorrans as subsequent kings and nobles have themselves taken steps to secure the authority of Lithmore above all others.

Alternately, Lithmorrans enjoy the riches of all the duchies and are among the most educated peoples of the realm due to their culture of familial fidelity.  Parents are duty bound to see their children with an education while children are bound to obey their parents until they are married (regardless of age, en passant, or gender).

Lithmorrans are the only distinctly fair peoples of the realm barring the fiery, redheaded Charali.  However, their pale skin, blue, green and gray eyes, and blonde features tend towards the cooler palette.  Women wear their hair long as do men, both typically tying it back and away from their faces, and it runs the gamut of straight to curly. 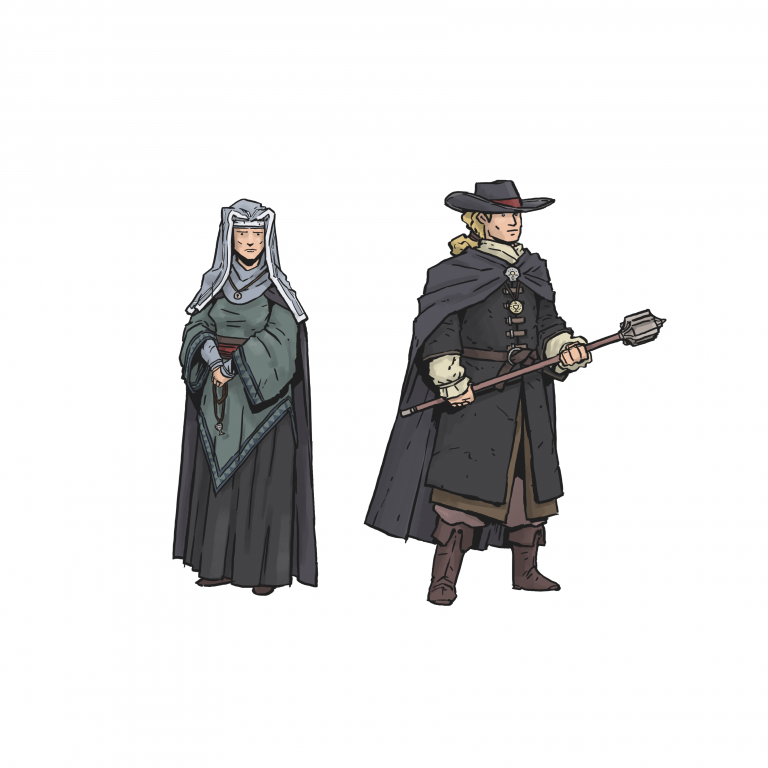 Lithmorran clergy tend to bear some of the most elaborate and ornate rituals, as well as some of the greatest overt wealth of any province save perhaps Vandago.  However, perhaps to avoid the impression of excess opulence, Lithmorran priests forswear the wearing of gems or jewelry. Rather than glamorizing its members, the Lithmorran clergy devotes much of its money and energy into creating great monuments and works of art to the honor of Dav and the Lord of the Springs.  Utterly lacking in small shrines, Lithmore is dotted with medium-sized and especially large cathedrals, especially in the city proper, and thus is the traditional seat of the High Synod.

In dress, Lithmorrans are one of the most conservative of the duchies though they enjoy some of the richest variety in cuts and styles due to their central location as the hub of the realm.  The entire body of both men and women is covered with material, including wrists, neck, and ankles. In art, a display of bosom indicates a prostitute, and anything below the collarbone is generally considered lewd.  Proper women wear dresses or skirts, or divided skirts if mobility is an issue.  Ankles and wrists are considered objects of desire, making the dagger sleeve and other loose cuffs filled with laces and undercloths popular.  Sleeves, therefore, almost always cover the wrists and frequently more, sometimes trailing loosely over the fingertips.  Women almost always braid their hair or wear it pinned up beneath the scarves and hats they wear.  Loose hair, as with a visible bosom, is a sign of loose morals. Lithmorran dress is distinctly medieval in style.

Cloaks: Almost every Lithmorran, from richest to poorest, owns a voluminous cloak, and wears it frequently.  The cut of such cloaks frequently bears a mantle and slit-arms to prevent drafts during winter months, though richer persons do tend to own a winter and summer cloak. Hats: Both men and women are fond of hats, the more artistic the better. It is not uncommon for Lithmorran women to be seen in stylish wimples and pillboxes that are adorned with jewels or flowers, depending on the woman’s social standing as well as the season.  Men, on the other hand, have taken to molded hats, often in shades of lightest gray to deepest black, of brushed wool or velvet, decorating them with such things as peacock plumes or a band of fur at the base. Stockings: Equally, no Lithmorran garb, despite class or gender (or even weather) would be complete without some form of hose or stockings. Status: Social status is apparent through the types of cloth, quality of dyes, fashionable design and the sheer amount of fabric a person wears.  No matter the season, Lithmorrans frequently use a lot of fabric, layering clothing so that the colors and materials of clothing beneath are apparent, and the more money one has, the longer one’s tunic or blouse.  No woman, however would wear a tunic without a skirt to cover her legs.  Colors: While not the “blind peacocks” typical in some duchies, Lithmorrans do prefer the bold use of colors, usually deep and gemlike greens and blues.

Being conveniently located along the Bren River and central in locale within the Kingdom, Lithmore is a bustling trade center, with merchants bringing in imported goods in exchange for the local export goods.  There is a variety of naturally recurring resources that amply provide a preponderance of highly sought after commodities throughout the kingdom, including food stuffs, clothing concerns and minable alloys. The Lithmorrans produce and trade in high quantity quality dyes in the following colors: blue, yellow, green, pink, grey and black. Among their other exports are wool and honey, products of the rolling hills in the southwestern reaches of the duchy. Mines produce copious quantities of quartz, tin, copper, and marble.  Bronze is readily made from the tin and copper and also sold for a premium.

Lithmorrans, due to their central location, have access to many of the spices from other duchies, but still tend to eschew them in their diets. The temperate climate means that Lithmorrans eat seasonally: fresh citrus fruits during the summer, berries in spring, preserves in winter, and so on. They do not have a climate suitable for easily storing food via temperature control, so meat can sometimes be less than fresh when cooked. This has lead to the extreme use of sauces to complement (and often hide) the taste of the food in and of itself.  Their most basic foods are from wheat products, such as bread.

There are several customs that are distinctly Lithmorran and rarely shared by the other duchies: Church Spires: No building may be higher than the local church or cathedral except the king’s palace – because of this custom, church steeples are usually visible all over towns and cities. Masculine Bias: Despite the Decree of Sodality, while legally women are equals to men, the social times have yet to fully catch up.  Women have less freedom to behave as they please and the concept of propriety binds them as strongly socially as the old laws did economically.  For example, women who wear their hair loose are usually considered to have loose morals, and frequently it’s a signal that Lithmorran prostitutes use to ply their trade.  Equally, however, men are expected to act the gallant or may lose esteem in the eyes of his peers.  Ultimately, men and women enjoy very distinct gender roles, despite the equality inherent in Lithmorran law.  Taverns: During bad weather, Lithmorrans almost always visit the local tavern for gossip and company.  The worse the weather, the more likely commoners and nobles alike will seek the company of others, both family and stranger.  It is said to stem from the Law of Caring, but the true origins of this tradition are more likely in the farming cycle.  Good, warm weather is reserved for time in the fields and cold, poor weather offers a break from self-imposed isolation.  Regardless, whether a Troubadour is present or no, the onset of cold days and rainy weather calls for a good story or shared gossip at the local tavern.  Witch Balls: Lithmorrans often wear or hang hollow wax balls about their person or in their home to ward off witches.  Particularly wealthy Lithmorrans may have glass balls instead of wax.  It’s believed that these hollow balls will trap evil inside instead of letting it affect the ball’s surroundings.

Puritanical in nature, marriage is put on a pedestal by Lithmorrans. Once wedding vows are taken, they are inviolate, and frequently these vows are not for personal affection, but a contractual arrangement between families.  Couples are usually no more than a few years apart in age, and rarely have more than five children.  It is almost unheard of for widows and widowers to remarry except after a good length of time has passed; if one were to marry more quickly it may be viewed a sign of infidelity. Similarly, divorce is absolutely not allowed, though annulments may occur at highly irregular intervals, and even so, Lithmorrans highly oppose the procedure (help Daisy Chain).  Lithmorrans rarely lose contact with their more distant relatives, and the focus of relationships within a family unit is that of filial fidelity.

“Rich and gauche, the Vavardi are impious and too concerned with material wealth.”

“Innovative but not intrinsically inventive, the Vandagan has it hard; I simply cannot understand why they’d choose to lead the kind of lives that they do.”

“It’s sad that we’ve neglected them for so long, but it is also admirable that they’ve managed to avoid the material corruption that exists in Vavard. We should educate them, and maybe in a century, they’ll be elevated enough to live in our cities.”

“The Tubori are what the Vavardi would be without money.”

“Honor has its place, but let us remember that nothing comes
before the Lord.”

“Some people say they can be redeemed, and that they possess the kind of chivalry that exists only in Farin, but they are irredeemably under the thumbs of mages and must be destroyed… as soon as we’re sure we can win.”

“There is nothing more important in this mortal life than faith, {x and the Holy Order ensures that we ascend to the side of the Lord; and they protect us vigilantly from the threat of evil everywhere.”

“Law and order are the pillars of any society, but the Reeves serve the King.”

“Troubadours are the heart and soul of every man, bringing lightness to heavy hearts, and warmth to the weary on a cold winter’s night.”

“These misguided souls believe they deserve more than what the Lord of the Springs intended for them. If they were to be taught the truths of the world, they might reform and be welcomed anew into society.”

“The strict adherence to honor and discipline as tenets of worthiness is the greatest weakness of the Knights Lithmorran. Then again, it is also their greatest strength.” 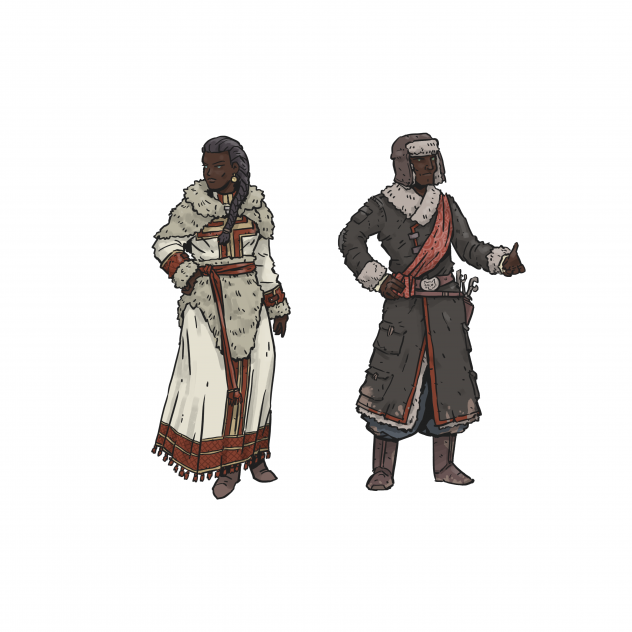 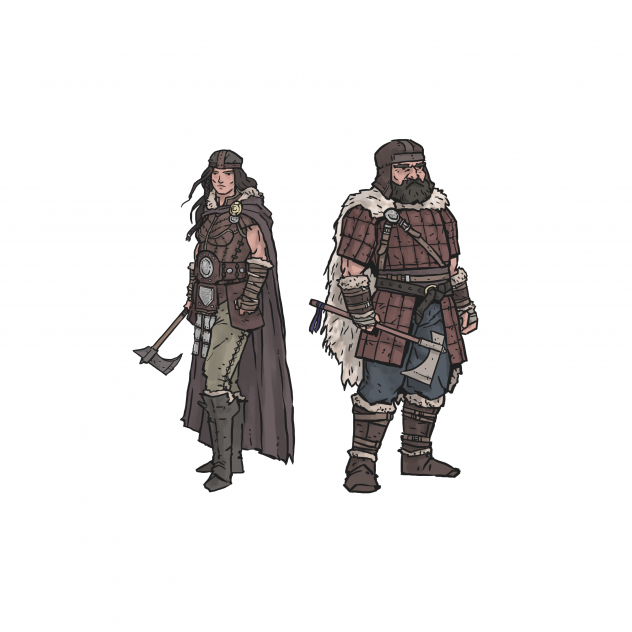 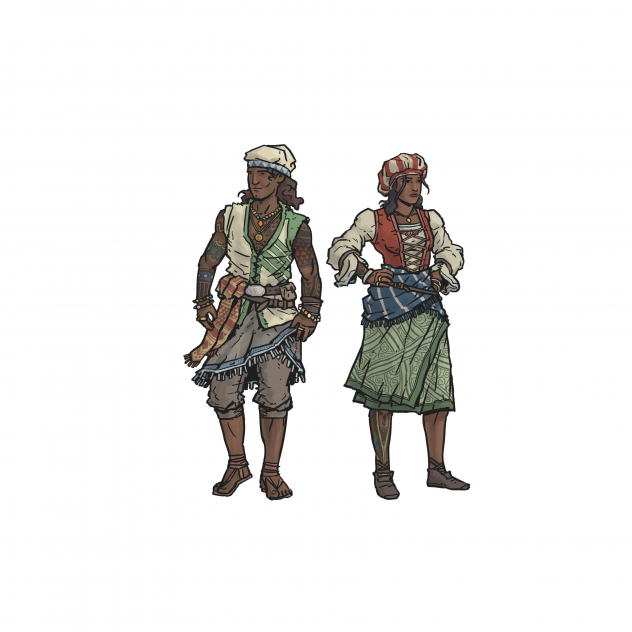 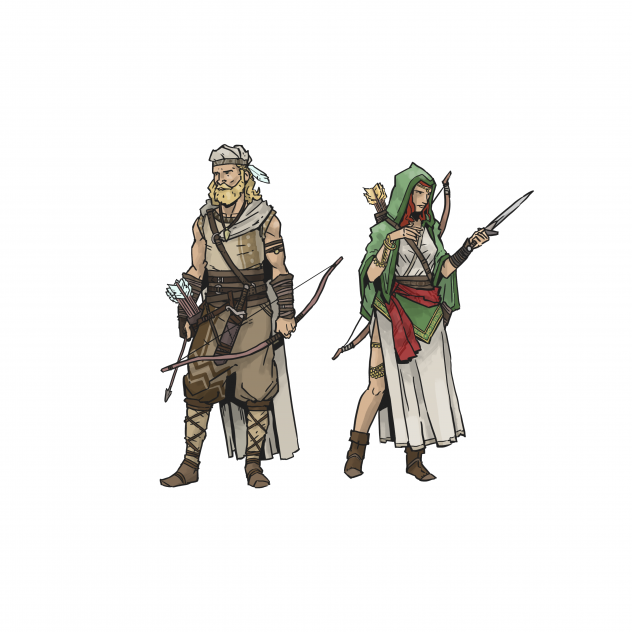 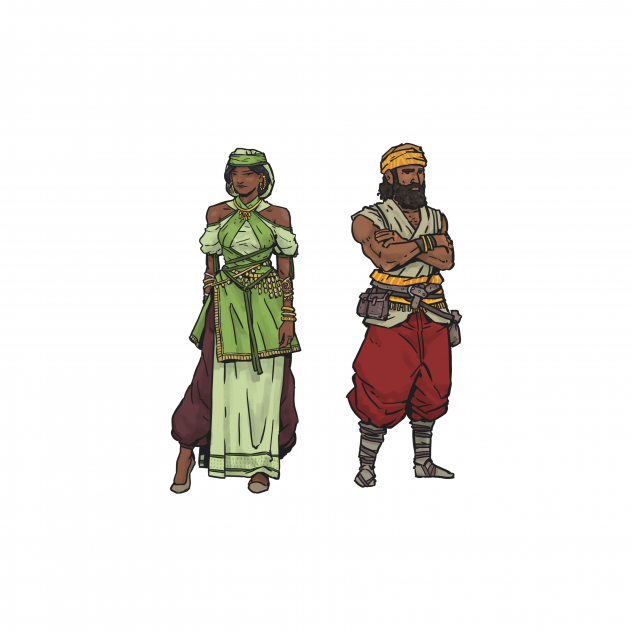