Post logs, pictures, poetry and more. (Please request the permission of others before posting logs about their characters. Thank you!)
Post Reply
6 posts • Page 1 of 1 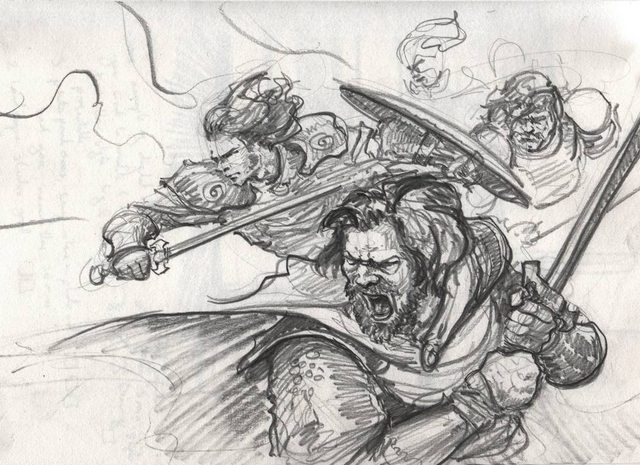 Facing the widespread Silver Horde activity in the Barony of Asglen, Lord Norrig op Arcenant is forced to order a levy of the peasantry into the militia. Small hillish raiders party attack left and right and disappear before the baronial chevaliers can arrive, taking lithmorran slaves and killing the rest. To prevent Asglen's famous wheat fields from being too unattended, he invests into recruiting mercenaries from Lithmore City and elsewhere at a significant price. The domain is thus mobilised for a total war.

Meanwhile...
... on some roads, cart convoys are approached by Asglen-uniformed men, who turn out to be raiders in disguise. However, the carts turn out to be secretly filled with hidden baronial soldiers, who counter-ambush the hillmen and drive them off or kill them. Rumor has it that the militia recently gained the information on stolen uniforms from the Pausentown freelancers, and used it to their advantage.
Last edited by Kuzco on Mon Oct 26, 2020 6:11 pm, edited 1 time in total.
Our Facebook group! ---> https://www.facebook.com/groups/213118822579170/
Top 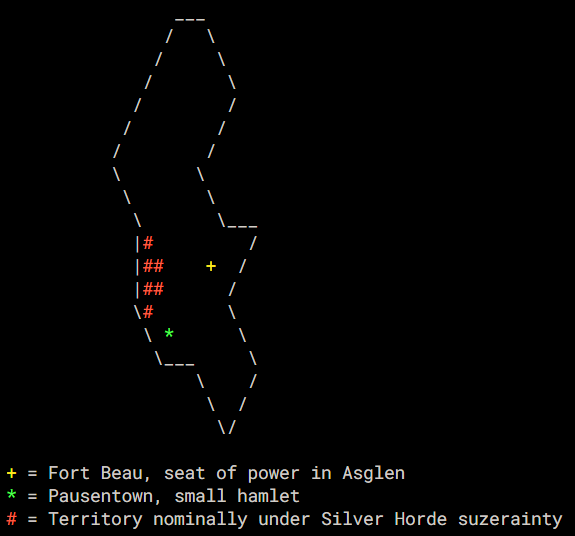 (For screen readers: a map of Asglen in ASCII, showing Fort Beau, the baronial seat of power, on the mid-east. On the west, a north-south stretch of red-colored land is under control of the Silver Horde. Southeast of this, a small green asterisk denotes Pausentown, a small hamlet)
Our Facebook group! ---> https://www.facebook.com/groups/213118822579170/
Top

The Horde advances, mercilessly. Fields burn, citizens flee, and militia rout when not cut down by hillish raiders. The wheat harvest sits unattended. People murmur in taverns, "When will the Lord counter attack?"

Meanwhile...
With the news of a group of operatives passing as slaves in a Silver Horde feast, that included chieftain Luborad, the Asglen forces get into motion. A hillman spy in the village outside Lithmore City is captured before he could flee, and hanged. Many freed slaves are whisked away to safety. There is an intensive search for the daravi slave smuggler 'Hassan'. And finally, Lord Norrig begins directing resources to the defense of Fort Beau.
It is there that the fate of Asglen will be decided upon. 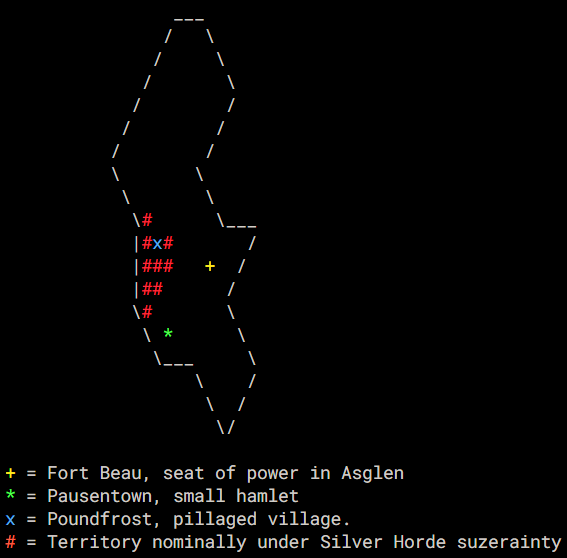 With the arrival of several high-profile volunteers and allies to Asglen's capital, the militia is trained and upgraded, while the fort itself undertakes repairs. Within a few weeks the belegueared pitchfork-wielding-peasantry is transformed into a decent fighting force, disciplined and well-equipped.
Now it is time to wait. Now the two great beasts, Baron and Chieftain, circle each other over the burning fields of Asglen. Make no mistake -- when they clash, it will be to the death.
Our Facebook group! ---> https://www.facebook.com/groups/213118822579170/
Top

Asglen burns.
The end nears. Little by little the forces of Asglen have fallen back. They've ceded territory to the Silver Horde, bidding their time. Villages have been evacuated. Wheat fields have been torched. The Horde has claimed all it could. Like a mindless beast, it gorges on it's spoils, chewing and gulping heedlessly, not minding how stuffed, how heavy and how slow it has become.
Asglen burns.
The baronial militia is ready. They have been trained tightly and armed to the teeth. They are rested, fed, and motivated. To the far west, the hillish thralls under the control of the Silver Horde have rebelled, thanks to a volunteer diplomatic mission. The warband's Chieftain, Luborad, cannot even call his own tribe for aid, for they have denounced him to the bards. The raiders have nowhere to fall back to, winter is coming, and all the available food is in one place: Fort Beau, the barony's capital.
Asglen burns, and it will engulf all those that dared trample it's beloved fields.
Our Facebook group! ---> https://www.facebook.com/groups/213118822579170/
Top
Post Reply
6 posts • Page 1 of 1

Jump to
Powered by phpBB™ • Design by PlanetStyles